An Egalitarian Approach to Ministry

General William Booth, co–founder of The Salvation Army, wrote in 1908: “I insist on the equality of women with men. Every officer and soldier should insist upon the truth that woman is as important, as valuable, as capable and as necessary to the progress and happiness of the world as man.”

The Salvation Army adheres to an egalitarian approach to ministry. But what does that mean and why does it matter? First, we must understand the definition of “egalitarian.” It is defined as “viewing all people, regardless of arbitrary characteristics, as equal in status and ability.” It means that as Kingdom people we value all people as part of God’s mission here on earth. We see, “the full dignity of women who are gifted and called by God Himself to serve His church and the world. Restrictions placed upon the full exercise of those gifts have handicapped the church through the ages and kept the gospel from going forth in its full power” (Clouse, 1989).

In the referenced material (below), Clouse advocates that egalitarians propose that there has been a misinterpretation of the Genesis narrative. In Genesis 2 Eve is translated as “helper,” but the original word is “ezer kenegdo.” The only other person to get this descriptor is God (17 times in OT). “God is hardly secondary or subordinate to us. The other [uses in the Old Testament] refer to a military ally,” (Clouse, 1989). This shifts understanding of Eve’s role in the dawn of humanity.

Egalitarians also suggest that the issue of “subordination” is a product of the curse in Genesis 3. “Sin damaged all the good relationships that were present in Eden: God and people, people and nature, Adam and Eve … desire for power was the very essence of the first sin in the Garden of Eden … yet Christ came to free us from such bondage to sin and to create a new humanity who could be loving and compassionate rather than hungry for power” (Clouse, 1989). Christ died that the curse of sin might be broken (Romans 5:12 –21). We are free in Christ to live out our original design. We are not beholden to the curse on our relationships any longer.

Catherine Booth argued that events of Pentecost sealed the place of women in the ministry of the church. In her pamphlet “Female Teaching” (1859) Booth writes: “[In Acts 1:14; 2:1,4] we are expressly told that the women were assembled with the disciples on the day of Pentecost; and in the second, that the cloven tongues sat upon them each, and the Holy Ghost filled them all, and they spake as the Spirit gave them utterance … The Spirit was given alike to the female as to the male disciple, and this is cited by Peter [Acts 2:16, 18], as the peculiar specialty of the latter dispensation” (Booth, 1859).

The implication is that female disciples preached the Word in a foreign language right next to male disciples. This drastically changes the image for the events of Pentecost. The women were an active part of the “inauguration” of the church. It wasn’t just Peter, James, and John that day; Mary, Salome and Martha were there too. 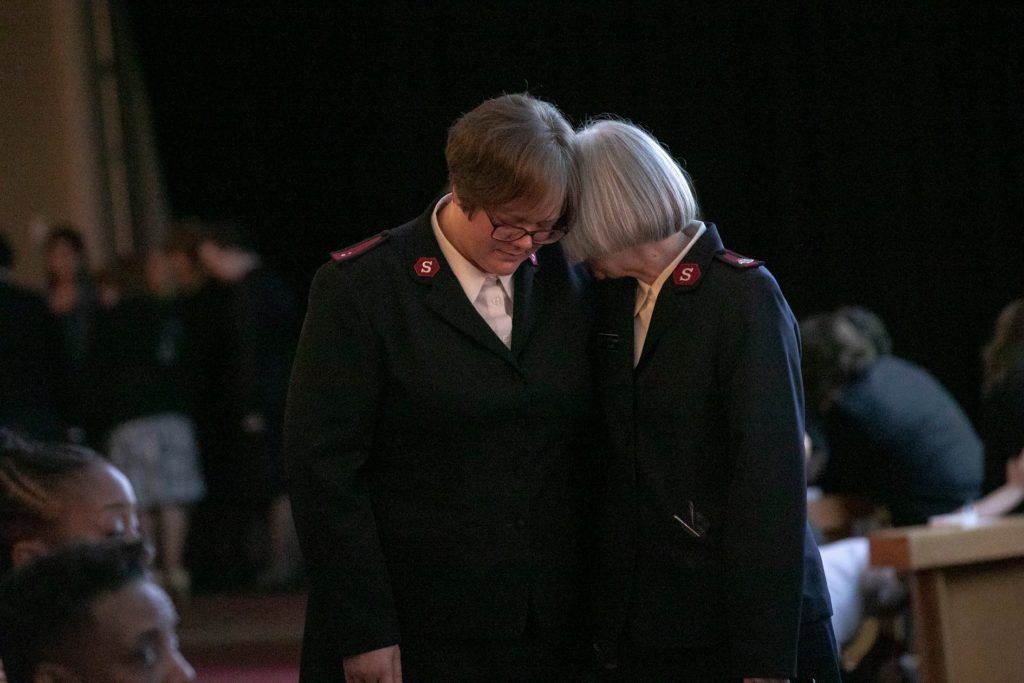 When we look at history, the push for equal treatment of women began in the Church. But what does Egalitarianism mean for us today?

In order to be true to our roots as an egalitarian Army we must value men and women as individuals, rather than giving into systems that tell people who they are ‘supposed’ to be based on their gender.

Being egalitarian means we resist patriarchy, which is the act of orienting a system towards males and devaluing women.

In the Church, patriarchy can show up telling women to get smaller. Sometimes it is disguised as modesty imperatives. Sometimes as a form of legalistic oppression of how I behave, dress, or participate as a woman of God. The truth is we are just women who are longing to live into who God has created us to be.

Christian patriarchy also shows up when we badger all women to get out in front and be our idea of a leader. It is when we assume that there is only one way to support equality of the sexes or we demand that “your feminism look like my feminism.” It rears its ugly head, to borrow a phrase from a magazine article (Cargle, 2018), when feminisim is simply “white supremacy in heels.” If I am not paying attention to the women of color around me, making space for them in the conversation, then I am simply bolstering Christian patriarchy’s grip on it all.

Here’s what you can do about egalitarianism right now: Don’t let anyone tell you what it looks like for you to follow God. The way you raise your family, manage your home, wear Salvation Army uniform or not, work outside the home, preach, remain single, or decide to homeschool your children is between you and God. Also, stop telling other women what it looks like for them to follow God. That’s between them and God. You’re responsible to live as God created you to live. We all need to respect the woman sitting next to us. She’s trying to do the same thing as you. Pay attention to the stirring of the Holy Spirit in your own soul. Honor one another. There is already enough critics in our lives. What if we endeavored to reduce that number by one?

The greatest weapon we have against Christian patriarchy is for women to support other women as they live the life God called them to live.

Next blogMinistering to Moms of Many