“A Chasing After the Wind”

My husband and I recently visited family in another state. While there we contacted a friend who had recently been widowed. Her husband had been the best man in our wedding. Our friend asked if we would go to breakfast and church with her on Sunday, to which we readily agreed.

The title of the sermon series was displayed on a banner at the back of the platform. The words, “A Chasing after the Wind” appeared beside a representation of a tree bent over in the wind with only a few leaves left on its branches. Although I did not recognize it from that title, the sermon series was based on the book of Ecclesiastes. When we left the church, I commented on how much I enjoyed the sermon. My friend said, “Yes, me too. But Ecclesiastes is so depressing—until you get to the end.” My curiosity was piqued. I had to find out exactly what was so depressing about Ecclesiastes and how it turns around in the end.

Although I had read the book in its entirety a few years ago when I read through the Bible in a year, all I really remembered from Ecclesiastes was the familiar part of the third chapter, summed up by the words, “A time for everything.” I discovered that there was much, much more to the book and that it contained some serious lessons that are particularly relevant to our world today. Here are some of the highlights I came away with.

Most scholars believe that the book of Ecclesiastes was written by King Solomon, son of King David. He is the King who rebuilt the Jewish temple using the most opulent and expensive materials possible. He was deemed to be incredibly wise and incredibly wealthy. It is thought that the book of Ecclesiastes was written near the end of Solomon’s life, as he reflected back. It is a cautionary tale about searching for happiness. It is very interesting, under those circumstances, that the first verse of the first chapter uses the word “meaningless” four times. “Meaningless! Meaningless!” says the Teacher. “Utterly meaningless! Everything is meaningless.” In fact, the word “meaningless” appears 36 times in the book of Ecclesiastes. Eight of those times, it is followed by the phrase, “a chasing after the wind.” So how does this have anything to do with happiness? Solomon is telling us about five different ways he experimented over his lifetime to find happiness: wisdom, pleasure, work, wealth and women (relationships).

The first way Solomon searched for happiness was through wisdom. Since he was born into King David’s family, he had the benefit of all the best philosophers, tutors, books and art of his time. He wrote over 3000 proverbs and over 1000 songs. But now, at the end of his life, his conclusions about wisdom, found in chapter 1:13, 14 state, “I applied my mind to study and to explore by wisdom all that is done under the heavens … all of them are meaningless, a chasing after the wind.”

The next experiment Solomon tried to find happiness was pleasure. In chapter 2:1, he defines pleasure as laughter, wine and folly. These were the avenues he pursued in his search. What he found was the result of trying to find happiness in forcing himself to be lighthearted, by indulging in alcohol and by acting impulsively without thinking things through. “I said to myself, ‘Come now, I will test you with pleasure to find out what is good.’ But that also proved to be meaningless.”

Next, Solomon decided to throw himself into his work. In chapter 2:4-6, he went all “HGTV” on us! “I undertook great projects: I built houses for myself and planted vineyards. I made gardens and parks and planted all kinds of fruit trees in them. I made reservoirs to water groves of flourishing trees.” Of his pursuit of work, Solomon sadly concluded in Chapter 2:11: “Yet when I surveyed all that my hands had done and what I had toiled to achieve, everything was meaningless, a chasing after the wind.”

He tried the pursuit of wealth (Chapter 2:8-9): “I amassed silver and gold for myself, and the treasure of kings and provinces … I became greater by far than anyone in Jerusalem before me.” Biblical scholars estimate that in today’s economy, Solomon would be worth $2.2 trillion—the richest man who ever lived. But despite all of his wealth, Solomon draws four conclusions in chapter five from his experience in accumulating wealth: “Whoever loves money never has enough; whoever loves wealth is never satisfied with their income. This too is meaningless”(5:10). No matter how much wealth you amass, it is never enough. You will never be satisfied. “As goods increase, so do those who consume them. And what benefit are they to the owners except to feast their eyes on them?” (5:11)

The more you have, the more people want from you. This is probably something most lottery winners could attest to. “The sleep of a laborer is sweet, whether they eat little or much. But as for the rich, their abundance permits them no sleep” (5:12).” Solomon found that the more money you have, the more you have to worry about and lose sleep over. “I have seen a grievous evil under the sun: wealth hoarded to the harm of its owners” (5:12). In other words, having wealth can lead one to become miserable.

The last lesson Solomon presents in Ecclesiastes is what happens when you try to find happiness in, as he put it, “the delights of a man’s heart.” Knowing that King Solomon had 700 wives and 300 concubines, we know what he’s talking about. In Chapter 2:8 he states, “I acquired male and female singers, and a harem as well—the delights of a man’s heart.” Of pursuing relationships and physical pleasure, Solomon says in chapter 2:10-11, “I denied myself nothing my eyes desired; I refused my heart no pleasure. Yet when I surveyed all that my hands had done and what I had toiled to achieve, everything was meaningless, a chasing after the wind; nothing was gained under the sun.”

There are 12 chapters in the book of Ecclesiastes. The first 11 chapters are a cautionary tale regarding the pursuit of happiness. King Solomon, a man with unlimited opportunities shares his extensive experience of searching: wisdom, pleasure, work, wealth and relationships, in search for happiness—and discovers it is all meaningless, a chasing of the wind. Until you get to chapter 12. In this chapter Solomon reveals a conclusion that seems almost too simple to be true. Chapter 12:1 starts with these three words: “Remember your Creator …” Put God in His proper place. Acknowledge His supremacy and power. This is the way to have happiness, peace and fulfillment in this life. “Now all has been heard; here is the conclusion of the matter: Fear God and keep His commandments, for this is the duty of all mankind” (Chapter 12:13).

To live a life of happiness, of contentment, all that is required from mankind is to remember to worship, respect and obey our Creator God—no matter what the circumstances. It is really that simple. 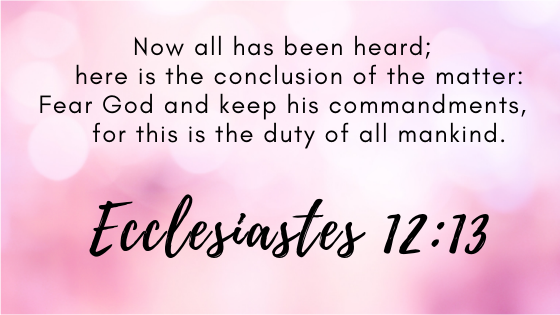 Previous blogIntroducing a Woman to Jesus – Your Ministry Matters