History has shown us that a disaster can significantly impact our lives with little or no notice. Emergency preparedness is vitally important. There are many resources to help women get their homes ready for a disaster, whether it is a tornado, major snowstorm, flood, earthquake or other crisis event.

The history of disaster preparedness and response in the United States can be traced back to the early days of our country. During the 20th century, we have seen it take on a more organizational approach. The Salvation Army began its work in disaster response during the great Galveston Hurricane of 1900. The Army’s first service was performed by individuals who walked the streets, carrying water and coffee, hoping to give just a bit more energy to the suffering and those who arrived to help the city recover from tragedy. There were no sophisticated mobile kitchens at that time but rather people helping people doing God’s work.

If possible, request the Divisional Emergency Disaster Services Director to bring a canteen and demonstrate service. If the corps has a canteen, invite a local team to serve from the canteen.

Have the women watch the following video – https://ready.gov “Six Things You Should Know Before a Disaster.”

Plan a fundraiser. The proceeds could be used to purchase disaster cleanup kits to be utilized at your corps or donated to the Divisional EDS Department. The kits can be purchased from Precise Kit Promotions, Inc. for a cost of $20.00 per kit.

In September of 2018, Hurricane Florence approached the Carolinas as a category four hurricane. Predictions were that the impact would be catastrophic. The Salvation Army began to mobilize its response. The Hurricane Florence Incident Management Team/Area Command assembled at Divisional Headquarters in Charlotte, North Carolina, Mobile Feeding units from Charlotte, Hickory, Greensboro, North Carolina as well as mobile feeding units from Greenville and Anderson South Carolina were deployed to provide support to those affected along the coast. The South Carolina Baptist Disaster Relief organization came alongside the Charleston Salvation Army to assist in providing hot meals. Multiple staging and logistical centers were established in North and South Carolina and Virginia. An additional 27 mobile units from Alabama, Louisiana, Mississippi, Florida, Georgia, Kentucky and Tennessee were deployed to Charlotte, North Carolina and Roanoke, VA. After the storm passed, they were deployed to affected areas as needed. The Salvation Army also provided mass feeding in shelters, Emergency Operation Centers and wherever local emergency management requested services. The Salvation Army was prepared when the storm hit.

A life of vigilance is evident in the following ways according to Matthew’s Gospel:

When we are vigilant in seeking an abundant spiritual life in full anticipation of Christ’s return, He will be waiting with open arms to receive us into His kingdom, saying, “Well done, good and faithful servant!” 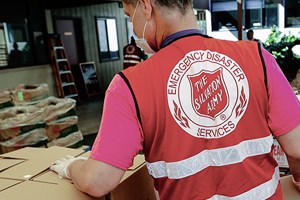 Next postSeptember 2021 – Five Dimensions of Self–Care